What is Web 3.0 and why it is so important for business? 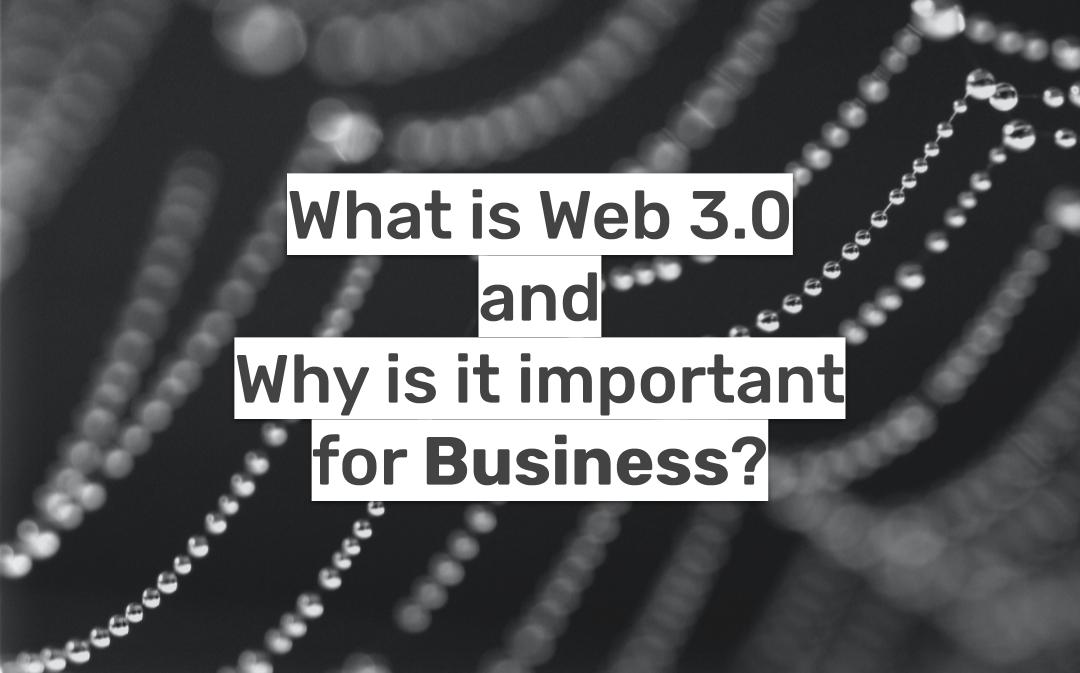 Greetings to all!
Web 3.0 as concept and technology is important and here is why.

Day after day, the amount of data and information as we discussed in the last post on the internet grows exponentially. New sites, images, videos and all sort of digital materials are coming up every second. Thus, with this huge set of data, a major challenge is how to cost-effectively extract what is relevant to our day-to-day activities. Therefore:

In a complex ever-changing information-intensive context, Web 3.0 tools are valuable for users in organizing information and business processes at large scale.

The evolution of the Web

Firstly, since the emergence of the first Web version, created in the early 90s by Tim Berners-Lee in Switzerland, its technologies have undergone significant changes until we reach the surface of Web 3.0, this happened especially in terms of user’s interactivity and the massification of the internet usage.

In short, according to our research a Aquarela Analytics, the Web’s history presents three major stages:

The Web 1.0 presented data and information in a predominantly static way, being characterised by low users’ interaction with the content. For instance: leaving comments, manipulating or creating content of a website.

Technologies and methods of Web 1.0 are still widely used for displaying static content such as laws and manuals like this example: http://copyright.gov/title17/92preface.html . Yet, this text was build on this paradigm.

That generation of the Web was marked by the centralisation of the content production – such as portals,  AOL and directories, Yahoo, and Craigslist.

On Web 1.0 the user is responsible for its own navigation and the identification of relevant content, having a predominantly passive role in the process.

Another important aspect is that just few produce information that is consumed for many. Likewise, the broadcasting model widely used in the media industry by TV, radio, newspapers and magazines.

Web 1.0’s greatest virtue was the democratisation of information access.

Web 2.0 in contrast to Web 1.0 has its content predominantly generated by its users in a process where: many users produce content and many consume.

An example of this model is Wikipedia. Other examples of user-generated content platforms are in blogs, social networks and YouTube. In the Web 2.0 users are no longer just content consumers; they become producers or co-producers of contents.

In this version of the Web, search engines become more advanced and proliferate, since there is no more room for lists of links in directories, which has given a huge volume of content made by many.

Web 2.0’s great virtue is the democratisation of content production.

Web 3.0 or Semantic Web combines the virtues of Web 1.0 and 2.0 by adding machine intelligence.

Tim Berners-Lee (2001), who is the creator of the Web, has published an article in the Scientific American magazine setting up the foundation of the Semantic Web.

In his words, Berners-Lee explained how two brothers organised the logistics to support their mother health treatment, using intelligent agents, they do all the planning and execution of the process automatically interacting with clinical systems, among themselves and with their home devices.

In Web 3.0, the machines get along with users in content production and in decision-making, transforming traditional supportive role of the internet infrastructure to a protagonist entity in content/process generation.

Furthermore, Web 3.0 services can unite users and computers for problem-solving and intensive knowledge creation tasks. Therefore, with its large processing capacity, Web 3.0 is able to bring services and products to people and businesses with high added value because of their assertiveness and high customisation.

Web 3.0’s great virtue is the democratisation of the capacity of action and knowledge, which was previously only accessible to large businesses and governments.

Evolution of the Web summarized

Examples of Web 3.0 applications are Wolfram Alpha and Apple’s Siri, which can summarise large amounts of information into knowledge and useful actions for people.

We can do a little comparison between Wolfram Alpha and Google, using both tools, typing the “Brazil vs. Argentina” phrase in both searching engines, and then we see big differences in the results:

In the case of Google, the results turn out to be mostly about football games between Brazil and Argentina. Note that the word “football” or “games” were not mentioned in the search.

In Wolfram Alpha, the tool considers that the search is a comparison between two countries and consequently brings organised statistics, historical, geographical (maps), demographic, linguistic and other useful aspects for comparison analysis.

The Apple’s Siri, in turn, uses techniques of speech recognition and artificial intelligence to bring results and perform actions such as:

“Where is the nearest pizzeria?” or

“How far am I from the nearest gas station” or “make an appointment at 9:00 am tomorrow.”

Above all, Traditional tools (Web 1.0 and 2.0) make search matching “word by word like” of the text in relation to what is published on the network. In other words, often it brings information bias of what is most abundant ending up not bringing what is most relevant to the user at that time.

Web 3.0 systems, however, seek contextualised knowledge to assist people in their jobs, pointing to series of analysis and potentially helpful information.

One of the distinctions of Web 3.0 search engine, is the time that user need to spend sailing in a sea of ​​information to find what he/she really wants to get solved.

Companies like Apple and IBM have been investing heavily in Web 3.0 technologies, for example, the Google Inc. over the past decade has made several acquisitions of companies in the Semantic Web area, such as Applied Semantics, and Metaweb Technologies, Inc, among others.

We are living in an interesting time in history, where the Web begins to bring more knowledge and action capacity for its users, resulting in considerable changes in several aspects of daily life.

This new type of Web is moving fast towards a more dynamic and faster changing environment, where the democratisation of the capacity of action and knowledge can speed up business in almost all areas.

The areas impacted by Web 3.0 are ranging from: retail to applied molecular medicine; from micro-businesses to large corporations.

It is worth for innovative minds, whether business people, politicians, or researchers, to understand this new horizon of possibilities and be prepared for the new generation of businesses.

Some new business with the semantic web are already happening and, increasingly taking their momentum in the national and international markets.

Web 3.0 is the progressive evolution of the Web. Hence by not getting along with its evolution, managers might bring organizational risks that suddenly might become obsolete or irrelevant at the time of paradigm shifts like the giants of the past such as Kodak, Nokia and Altavista.

In future posts, we will talk about Data Analytics and Big Data solutions that we developed and which we believe to be the way to materialize business faster (earlier) than Web 3.0 and Linked Open Data (LOD), although all of them are getting more and more intertwined.  It is important to understand the way Web 3.0 is getting through Big Data and LOD.

Founder – Director of International/Digital Expansion, Master in Business Information Technology at University of Twente – The Netherlands. Professor and lecturer in the area of ​​Data Science, specialist in intelligence systems architecture and new business development for industry.