How Titanic passengers are segmented by VORTX Big Data?

To demonstrate how VORTX works, I selected a well-known dataset with information about the passengers who embarked on Titanic. Despite the tragic event, this dataset is fairly rich in details and has been widely used in Machine Learning communities since it allows the application of several Big Data techniques.

In this case, I am going to apply VORTX, which it is Big Data tool focused giving automatic segmentation plus other important decision-making indicators. This technique is called clustering. More information about this on this post (How can big data clustering strategy help business). In the conclusion section, I give some ideas on how it help businesses by means of this innovative approach.

According to Encyclopedia Titanica “On 10 April 1912, the new liner sailed from Southampton, England with 2,208 passengers and crew, but four days later she collided with an iceberg and sank: 1496 people died and 712 survived”.  For this analysis the data we had access we had the following figures:

For more details on the complete dataset – Google for Titanic Dataset.

Unfortunately, 267 passengers (20.39%) had to be excluded from the analysis due to missing age values. Furthermore, out of 15 factors presented in the original file, I select the numerical ones with stronger weights calculated by VORTX. Usually, we classify factors, variables or data attributes in the following 3 categories:

According to the influence power, the protagonists chosen for this analysis were:

During the calculation the gender that indicates if the passenger was male or female tended to play an antagonist role, meaning the absence of a pattern to form the groups dropping the dataset sharpness to 7%.  Therefore, it was removed.

After processing, VORTX resulted in the following indicators, which most of them are not offered by other algorithms, therefore, I give a brief explanation for each of them:

By analyzing the groups and checking against the ones who survived or not the trip I came to the survival rate of each group plus the average Ticket Fare, so if you have the characteristics of the group 5 or 7 you would have better chances of surviving.

Screenshots of the VORTX DataScope

Yet, another option is to look straight to the grouped data. In this case, I took a screenshot of the classified data of the group number 5, which has the most distinct passengers on the whole ship, probably right young people traveling with the whole family.

Looking at the case with a more than a thousand records is not a great use to find out theses profiles, however, if you have millions of transactions, millions of clients or patients, the tool could serve as the key tool to optimize your operation, reducing costs and better aiming at your public, so:

That was it, for now, hope this could be interesting and useful to plan your big decisions ahead. In case you need a little help let us know.

Thanks to the whole Aquarela’s team that are unstoppable making data analytics a lot easier and richer every single day. 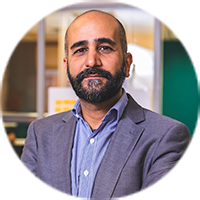